Curtis Jones' second-half stunner settled the Merseyside derby as Liverpool's young guns ​beat Everton 1-0 at Anfield in the third round of the FA Cup on Sunday.

Jones' curling strike beat Everton keeper Jordan Pickford all ends up to inflict a devastating defeat on Carlo Ancelotti's men, who never really got going despite having a wealth of experience to call upon. A fast and frantic first half produced no goals but ​Everton would have been kicking themselves that they were not ahead at the break.

It was then Divock Origi's turn to test the palms of Jordan Pickford in the Everton goal as he arrowed a shot towards the bottom corner that the England keeper did brilliantly to turn round the post, though the Belgian may have been adjudged offside had the effort gone in. The second half was petering into nothingness but then a flash of absolute brilliance from Jones turned the game on its head and put Liverpool in front.

From then the hosts never looked like losing and saw the game out with a real swagger as the Toffees limped to yet another loss to their bitter rivals.

All the talk prior to kick off surrounded Klopp's decision to make changes to his squad and put faith in his youngsters.

A lengthy injury list and fixture congestion may have prompted the Liverpool boss to rotate but James Milner pulling up in the seventh minute justified the German's selections. But the injury also left Joe Gomez as the only senior player in their backline and the lack of experience was exposed at times as Everton carved out several first-half openings.

However, Adrian proved an admirable backstop and Klopp's youngsters grew into the game after the interval.

Despite defensive frailties in the first half, Liverpool's youngsters shone in the second with a brilliantly composed and mature display, capped off by a goal good enough to win any game.

Welshman Neco Williams is very much a chip off the old block and there were a number of similarities between his performance on Sunday and the displays Trent Alexander-Arnold has put in most weekends this season.

Neco Williams, however, has been great. Full of running, full of desire to get involved. His delivery has been excellent more often than not. He has been where he's most needed when he's most needed at the back. Very impressive.

Confident on the ball, he was comfortable marauding down Everton's left with positive surging attacking play that gave the Toffees' defence cause for concern. His delivery also echoed TAA's trademark whipped crosses and he produced several tantalising deiveries in the first half.

Early in the second, he stung the gloves of Pickford and his link-up play with Harvey Elliot was slick. Williams was also composed at the back, nullifying each Everton attack that was thrown his way. He may have to bide his time given Alexander-Arnold's scintillating form this season, but it certainly looks like Williams has a bright future.

The onus was on Everton, who despite sitting 23 points behind their opponents in the Premier League were touted as favourites due to Klopp's selection.

Ancelotti opted to stick with a strong team, only making two changes from the 2-1 defeat at Manchester City on New Year's Day. 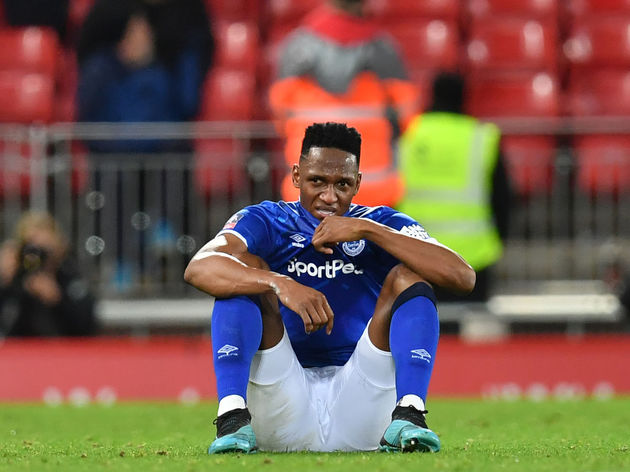 And although the Toffees did take advantage of a naive Liverpool rearguard at times, they found themselves wanting in front of goal.

Then the unthinkable happened.

In a game where all the odds were stacked in Everton's favour, the pendulum suddenly swung away from them in the blink of an eye. It was a desperately disappointing day for Ancelotti's team who saw a golden chance to beat their fierce rivals slip away.

STAR PLAYER - The Everton keeper reminded Gareth Southgate why he should be England's number one with an incredible save in the first half.

Pickford produced a world-class stop from Origi in the first half, getting his fingertips to the Belgian's low driven shot to divert his goal-bound effort wide.

Jordan Pickford with a match winning save! What a keeper 理 #EFC pic.twitter.com/6PPeym2tXj

But Pickford was powerless to stop Jones' curling effort as it dipped over him and into the back of the net - not that the 25-year-old was at fault, given it was a sublime strike.

Liverpool continue their relentless pursuit of a first Premier League title in 30 years when they travel to ​Tottenham on Saturday.

As for the visitors, Ancelotti will look to pick his troops up in time for the visit of ​Brighton to Goodison Park on the same day.