​Manchester City will be aiming to keep their unlikely title hopes alive when they host Everton on New Year's Day.

The Sky Blues recovered from their shock 3-2 defeat to Wolves last Friday to beat a stubborn Sheffield United side 2-0 last time out. The win offered much-needed respite for Pep Guardiola and his side who, despite their victory, still sit 14 points behind league leaders Liverpool having played a game more.

However, knowing nothing more than perfection will do from here on in, there is pressure on Man City to earn back-to-back home victories. Meanwhile, this will be a very different Everton side to the one the Citizens beat 3-1 at Goodison Park earlier this season, with Carlo Ancelotti having guided the Toffees to successive Premier League victories in his two games in charge.

Dominic Calvert-Lewin sparkled once again as Everton triumphed over Newcastle 2-1 at St. James' Park, a victory that lifted the Merseyside club to tenth in the league. The good news for Everton fans is that they are now closer to Manchester United in fifth than they are to the relegation zone, something that seemed highly improbable a month ago.

Here's 90min's preview of the game.

Leroy Sane and Aymeric Laporte remain sidelined through long-term injuries for ​Man City, while the game will likely come too soon for David Silva and John Stones​ to feature. Ederson, however, will return from suspension following his red card at Molineux last Sunday. The visitors are without Alex Iwobi, Andre Gomes and Jean-Philippe Gbamin who are all still injured, while French midfielder Morgan Schneiderlin is doubtful to make the trip due to a calf problem.

Ancelotti may revert to the five at the back he used against Burnley given the attacking prevalence of Everton's opponents - City being the top scorers in the division. 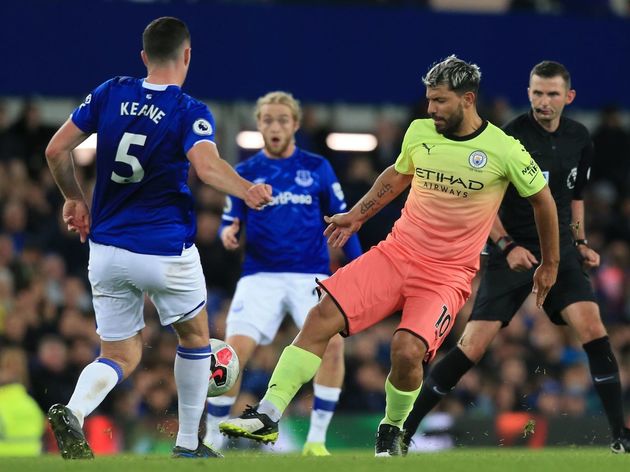 There have been a staggering 187 matches between these two teams with Manchester City having won 72 compared to ​Everton's 68, while there have been 47 draws. Wednesday's hosts have won the last four encounters, the most recent of which came at Goodison Park in late September. Goals from Gabriel Jesus, Riyad Mahrez and Raheem Sterling lifted City to a 3-1 win over the Toffees, but a new regime at Everton may tell a different story this time around.

While Guardiola's side have been nowhere near their unbeatable best, they still sit third in the Premier League, ten points clear of Manchester United in fifth, and just a point behind Leicester above them. They have won five of their last six matches, but lost two of their last five in the ​Premier League, something which has cut them adrift from top spot.​ Everton have enjoyed a remarkable upturn in form since Marco Silva's departure in early December. Started by Duncan Ferguson, and seemingly continued by Ancelotti, the Toffees have been much improved from the relegation threatened side we witnessed in the not too distant past.

Back-to-back wins, as well as no defeats in five Premier League games, has brightened the mood at Goodison Park, with fears of a relegation scrap all but forgotten. Everton have also kept two clean sheets in their last three matches, something that looks set to continue under their new Italian boss.

A few weeks back this could have been an annihilation, but now it seems slightly more in the balance. While Man City will head in to this as strong favourites, especially on home soil, a resurgent Everton could cause them unexpected problems. The pace and power of Calvert-Lewin and Richarlison on the counter-attack could expose the frailties of a lacklustre City defensive line, and a deep-lying block could frustrate the hosts to no end.

Having said that, it remains difficult to back anyone but City at the Etihad, despite having already lost there in the league more this season than in the entirety of last campaign.​ The return of Aguero and the blistering form of ​De Bruyne will more than keep Everton on their toes, who will need to defend with everything they have.