​Marco Silva believes a clinical edge was the difference between the two sides after watching his Everton side lose to Manchester City. He admitted his side need to be more effective in front of goal after seeing a number of good chances go begging. 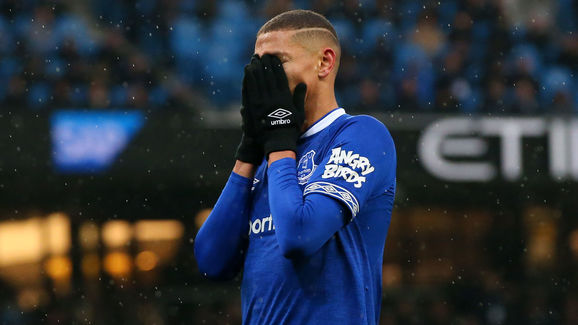 Everton set up to attack Manchester City despite a rigid looking formation and came the closest to scoring early. A searching Lucas Digne cross found Richarlison unmarked near the back post who went for the volley when he perhaps should have gone with his head.

The Brazilian got under the shot and fired harmlessly over with Ederson Moraes desperately backpedalling to cover the angle. City’s own Brazilian forward Gabriel Jesus didn’t make the same mistake with his chance minutes later as he gave the home side the lead. That goal came from a string of poor decisions involving Jordan Pickford and Yerry Mina. The England keeper passed the ball out to Mina who was camped near the corner flag. The Colombian then held onto the ball for too long allowing himself to be closed and forcing him to rush a sloppy ball forward.

City capitalised on that mistake picking up the loose ball and quickly converting it for the opener. Speaking to BBC Sport, Silva looked at that mistake as a key turning point in the game commenting:

"Until the moment they scored the game was what we expected. We were blocking them and they didn't create one chance. We made a mistake with the first goal, they scored and after that, they were more comfortable.” The second half began at a much higher tempo with Everton chasing the result and it wasn’t long before they were punished with Jesus adding his second. Dominic Calvert-Lewin did reduce the deficit with his first real chance of the game as Everton put pressure on the champions.

But Raheem Sterling came off the bench to add a third for City and put the game beyond Everton but not for a lack of trying. Calvert-Lewin and Richarlison both squandered big chances with substitute Theo Walcott making it a trio of crucial misses.

A little more composure and the result could have been very different for Everton and Silva knows how close his side came to an upset. “We made chances with Sigurdsson and Walcott. The biggest chance was our chance with Richarlison.

FT | A couple of chances after @CalvertLewin14's header gave us hope, but Sterling added a third to prevent any chance of a comeback against the champions.

“Against this team, we have to be effective when we create opportunities to score. They were more effective," he added.