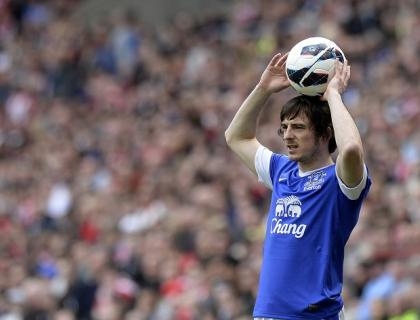 The club last week turned down a Â£12million bid for the left-back as former Toffees boss David Moyes returned to his old club in an attempt to cherry-pick one of their prized assets. While that offer was rebuffed United are expected to come back with a significantly improved figure but Everton have stressed Baines is not for sale and want the 28-year-old to extend his contract beyond the existing two years he has left.

Martinez underlined the England international's importance to the club, telling the Liverpool Echo: "I think Leighton is more than a player, he is an icon."

He added: "He represents a lot about our football club and I am really, really excited about Leighton.

"This is a big season for him and for us as a club.

"When you are the left-back of this football club, and the level that he has been reaching over the last few years consistently, it shows me that he is the best left-back in the country.

"I can't wait to start working with him."

Martinez, appointed as Moyes' successor last month, is meeting his players for the first time on Wednesday as they returned for pre-season training.

He hopes to be able to add to his squad in the coming days as Press Association Sport understands deals for his former Wigan players Arouna Kone and Antolin Alcaraz are almost done.

Striker Kone is likely to cost the Toffees Â£6.5million but centre-back Alcaraz will arrive on a free transfer once his contract has been finalised.