The hosts flew out of the blocks and were unlucky no to be 1-0 up in the opening minute of the game when Miguel Almirón's effort trickled wide of Jordan Pickford's goal after the Paraguayan was found by Joelinton.

A series of efforts on the Newcastle goal came and went, with Mason Holgate's shot bravely blocked by Martin Dúbravka after a goalmouth scramble. The resulting corner led to a free kick after Leighton Baines was fouled by Almirón on the edge of the area. Gylfi Sigurdsson's first attempt hit the wall, his second attempt was a scuffed shot which eventually found its way to Dominic Calvert-Lewin, who duly slotted home underneath Dúbravka.

The visitors were denied their sixth penalty of the season when Calvert-Lewin appeared to be bundled over by Federico Fernández, however referee Lee Mason deemed the challenge to be too soft to warrant a penalty.

Newcastle were themselves denied a goal after Andy Carroll slotted past Pickford after Almirón's effort smashed off the inside of the right-hand post - the former Liverpool man was adjudged to have been in an offside position by linesman Scott Ledger.

Dunc lit the touchpaper, Ancelotti is fanning the flames. Those are some attacking stats! #NEWEVE. pic.twitter.com/7PSiFeRv5M

The second half started just as the first finished, this time Everton coming close to doubling their lead through Moise Kean, the 19-year-old slaloming his way through the Newcastle defence before Dúbravka sprinted off his line to deny the youngster.

As the Toffees continued to attack, it was Newcastle who got their break, with a thumping finish from Fabian Schär levelling the scores on the 56th minute mark after some fantastic work from Carroll. Jetro Willems found the head of the veteran striker, who was able to guide his effort towards Schär.

The lead lasted approximately eight minutes, that man Calvert-Lewin scoring his second of the game after some good work from Walcott down the right-hand side. The Englishman found Richarlison, who cut the ball back across goal for the onrushing Calvert-Lewin, who could not miss.

After slumping to a 4-1 defeat against ​Manchester United on Boxing Day and having scored just 19 goals at the time of kickoff, Newcastle desperately needed a positive performance against Everton and, much to Steve Bruce's delight, his players gave just that. 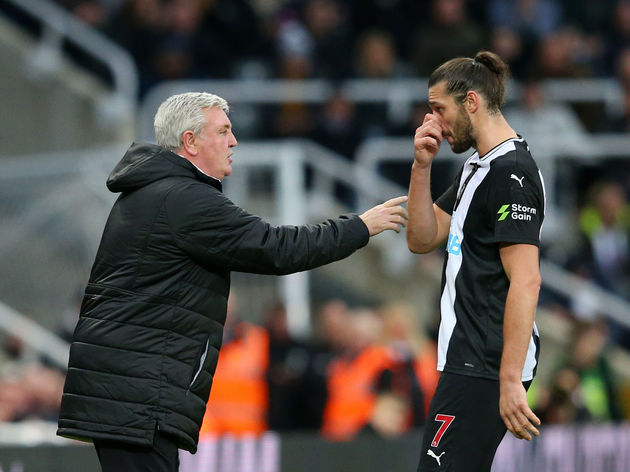 Both managers had set their sides up to attack with no fewer than seven strikers on the pitch in the first half, and this tactical setup produced an entertaining spectacle. It was an open-ended affair with both sides continuing to attack the other with no real emphasis on defending.

Steve Bruce's side were, however, more than capable of doing the dirty work with the likes of Isaac Hayden and Andy Carroll constantly battling to win possession to great avail. As the hosts started to assert themselves in the game, the Toffees struggled and squandered possession on a number of occasions. Bruce will, however, be bitterly disappointed with the result after a positive performance from his side. There were several solid performances from the Newcastle players, but Almirón was the pick of the bunch. His desire and work rate were noticeable as he fashioned a host of chances for himself and, if not for some less than clinical finishing, would have got himself on the score sheet.

Joelinton, Shelvey and Almiron have been a real difference in quality for us this first half #NUFC

The diminutive Paraguayan is still finding his feet at St James' Park, but the positive signs continue to surface and it is surely only a matter of time before he hits the same goalscoring form which prompted the Toon to shell out £21m for the former Atlanta United star.

Carlo Ancelotti clearly placed a heavy emphasis on attacking the five-strong Newcastle backline on Saturday as he instructed his midfield to press high and his full-backs to overlap the four forwards – Calvert-Lewin, Kean, Richarlison and Theo Walcott.

​Everton defenders continuously looked to break lines and bypass the Newcastle midfield with a simple ball into Sigurdsson or Davies in an attempt to unleash their front four. While this worked extremely well in the opening 25 minutes, his side were unable to cope with the physicality and brawn of the Newcastle midfield. The game was crying out for some defensive balance and Ancelotti produced just that, introducing Fabian Delph and Séamus Coleman early on in the second half after Everton scored their second. While that may not seem significant, having a manager with the tactical nouse to manage a game properly makes a huge difference when trying to find form in the ​Premier League.

It was another mature display from Everton's man of the moment, and warrants another 'Star Player' accolade for his exploits against Newcastle on Saturday.

The 22-year-old typified the resurgence that the Toffees have found over the last few weeks with his energy on and off the ball. His work rate was second to none on the day and managed to bag his seventh and eighth league goals of the season, his best return in a Premier League season to date.

Calvert-Lewin looks to be a crucial player for Ancelotti and the 60-year-old may be just as pivotal for the youngster's development into a top centre-forward. Expect great things to come in the second half of the season from Everton's golden boy.

Following on from their disappointing defeat against Everton, Newcastle welcome ​Leicester City to St James' Park on New Years day before an FA Cup third round tie against Rochdale at the Crown Oil Arena three days later.

Meanwhile, Everton have the minor task of travelling to the Etihad Stadium to face Pep Guardiola's ​Manchester City on Wednesday before they face ​Liverpool at Anfield in the third round of the FA Cup four days later.