​Life can be pretty bleak. With the climate crisis, a politically divided United Kingdom, and Brexit unproductively raging on, for many the only thing getting them through the year was the thought of the Gavin and Stacey Christmas special. And now that's done, so...now what?

Football has so often been people's solace, with the beautiful game offering a beautiful distraction to the monotony of everyday life.

Yet in recent years, football has tended to reflect everything that is wrong with the world; the elite are untouchable and sickeningly rich, while the rest struggle financially and cannot compete. Matty Longstaff made his Premier League at the age of 19, alongside his older brother Sean in the heart of the ​Newcastle midfield against Manchester United. Two local Geordie lads starting in the middle of the park for the Magpies against Man Utd already had the feel of Goal! about it - you half expected Santiago Munez and Gavin Harris to be up front for the Toon.

The Goal! vibes continued as Matty Longstaff scored the winner with a first time strike from distance to send the Newcastle fans into delirium. The two brothers spoke to Sky Sports afterwards in one of the most ​stirring post-match interviews ​in memory. Matty Longstaff was grinning from ear to ear, still in visible disbelief about his astonishing debut, while Sean beamed proudly at his younger brother. It was so pure, genuine and utterly heartwarming. Having spent the majority of his career at MK Dons and failing to make an appearance during a four year spell at Liverpool, David Martin must have thought his chances of playing in the top flight were long gone at the age of 33.

But following injury to first choice goalkeeper Lukasz Fabianski and a selection of poor performances from number two Roberto, Martin was drafted in for ​West Ham's Premier League fixture against Chelsea at Stamford Bridge.

The 33-year-old kept a clean sheet as West Ham ended their run of seven games without a win with a 1-0 victory. At full time, an emotional Martin – a boyhood West Ham fan – ran to the press box to embrace his Dad, former Hammer Alvin Martin, who spent 21 years at Upton Park.

Duncan Ferguson Shows His Soft Side 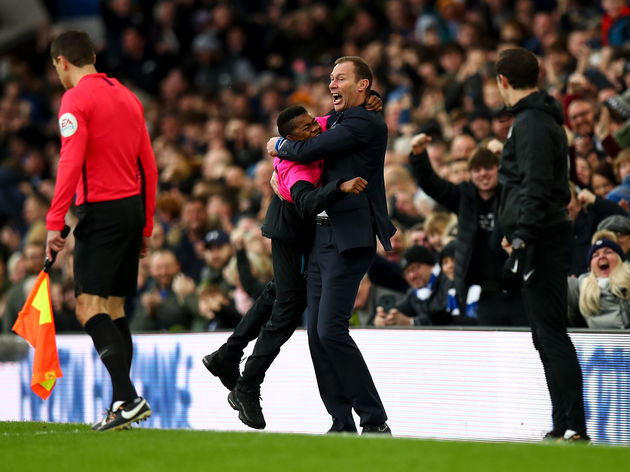 After Marco Silva's sacking, Duncan Ferguson was placed in temporary charge of ​Everton. 'Big Dunc' or 'Duncan Disorderly' had a reputation as a proper no-nonsense hard man in his playing days​ (four convictions for assault – including a jail sentence for an on-pitch headbutt – might've helped).

His first game in charge was against high flying Chelsea, and when Dominic Calvert-Lewin scored Everton's second, a ball boy leapt into Ferguson's arms. The not-so-gentle giant swung him round in delight, before giving another ball boy a hair ruffle on the way back to the dugout.

The uncontained passion and joy were a true reflection of how every football fan feels inside when their team scores.

Quite a sight.
The Rainbow Laces campaign at the Amex. #BHAFC pic.twitter.com/FJjT08qCXP

The 2019 Rainbow Laces support seemed to be bigger and garner more support than ever before. At the end of the weekend, following Brighton's draw with Wolves, Sky Sports pundit Graeme Souness gave a powerful assessment of the state of homophobia in the English game.

For a player from an 'old school' generation to hit the nail on the head when talking about an issue that was so vastly different in his day suggests that perhaps football has come further than some people give the game credit for. Lucas Moura scored at the death to complete a stunning comeback, triggering an outpouring of emotion from Mauricio Pochettino as he attempted to process what his side had just pulled off. The Spurs boss was in tears, hugging anyone he could get his hands on and demonstrating just what the game can evoke in even the most composed of managers. Despite a mammoth effort in the Premier League​, Liverpool agonisingly missed out on the title in 2018/19, meaning the hopes of their season finishing a success rested on the Champions League final. The Reds overcame Tottenham to be crowned European champions for the first time in 14 years, and captain Jordan Henderson was overcome as he gave his Dad a long, celebratory hug.

Brian Henderson had been battling throat cancer for much of Henderson's time at Liverpool, and he was the first person the midfielder sought to find after lifting the trophy.

The near misses in the Premier League and the Champions League the previous year and all the stick he had received earlier in his career seemed to come pouring out as the pair embraced and Henderson sobbed into his Dad's shoulder.

Franck Ribery and Arjen Robben Bow Out Together Ribery and Robben were phenomenal down either flank during an iconic era for Bayern Munich and, fittingly, the pair called time on their careers ​together. They bowed out with a goal apiece as Bayern sealed a seventh straight Bundesliga title.

Bayern supporters put on a fitting tribute for the pair who epitomised their decade of dominance, with Ribery making an impassioned, tearful speech to the fans, showing just how much the club meant to him.