The Best Players Ever to Wear Each Shirt Number at Everton

Some exceptional players were bound to miss out, while a number of crucial eras in the club’s decorated history went rather underrepresented.

From the brilliant goal machine Dixie Dean to the modern day reliability of Leighton Baines, Everton have had some of the very best - but who is Everton’s best ever number one? Who was the best to don the number 11 shirt? Anyone that argues Southall is ​Everton’s greatest player of all time has a pretty good case. So, despite some tough competition, to describe him as the club’s best ever goalkeeper is frankly obvious.

Not only is he a club legend, he's Wales second most capped player ever - and represented Everton for 17 years between 1981 and 1998. Southall used to race off his line and tighten the angle, and was at his most comfortable when facing a one-on-one situation. They do say keepers are mad.

The Welshman won two first division titles with Everton in the mid-1980s, as well as two FA Cups in that time too. Easy pickings at number 1. Now you modern day folk may be clamouring for Seamus Coleman, but unfortunately the Irishman has never donned the number two shirt - he's always had number 23 on his back.

So Stevens takes the honour, and he's not a bad player to have in there. With over 200 league appearances for Everton and 46 England caps to his name, he's got more than enough pedigree.

Stevens (bottom left in photo) was a harsh, forceful, yet elegant and athletic full back, skilled at dribbling up the line and then tracking back down it afterwards. He went on to spend long stints at Rangers and Tranmere Rovers, but is best remembered for afternoons in the blue of Everton - providing the team with a powerful dynamic at both ends of the field.

A key figure of the successful 1980s period. One of the easiest decisions in this entire XI, Baines has given nearly 13 years of excellent service to Everton Football Club and still appears in the ​Premier League to this day.

When he wasn’t banging home excellent penalties at crucial times in the early 2010s, the former Wigan man was perfecting the art of crossing. At times, it really did look like he was just that; the perfect crosser.

During the 2010/11 season, he scored five goals and contributed ten assists in the league alone, and were it not for Ashley Cole, he'd have many more than 30 England caps to his name. Kevin Ratcliffe joins Southall in the list of Everton legends that came from Wales but dominated the English game.

A rare scorer at centre-back, Ratcliffe only ever found the back of the net twice for the Toffees, although one was a 30-yard screamer at Anfield. Ideal.

But Ratcliffe's game was aggressive, robust and no-nonsense - traits that helped him skipper the side to two league titles, an FA Cup success and a UEFA Cup Winners' Cup triumph. Dave Watson’s first England cap came at the Maracanã, when John Barnes lit up the entirety of Brazil to fire the Three Lions to victory.

But it's his club success that he'll look back on fondly, after 21 glorious years at Everton. In 1997, while still on the playing staff, he even assumed the managerial reins - helping the club stave off relegation.

A real leader of men, Watson soon fell back in-line when Howard Kendall took charge once more - and will forever be remembered as one of the driving forces behind Everton's success. It’s a pity for Peter Reid, who was an excellent defensive midfielder for Everton and England (although not against Diego Maradona at World Cup ’86), to miss out but Jagielka simply has to take the number six shirt.

Yes, he sometimes looked out of his depth at international level, but for Everton, Jagielka was as reliable as they came - and was a real leader of the dressing room. An old-school kind of defender, Jagielka was cut from the same cloth as John Terry - or perhaps more fittingly - that of Ratcliffe.

Helped the club reach the FA Cup final in 2009, also leading the club to regular finishes inside the Premier League top six.

The Everton wings have seldom seen such quality assuming them as when Trevor Steven spent six years at the club in the mid-to-late 1980s.

Steven joined in 1983 for a then-astronomical £300,000 from ​Burnley, aged just 19. He'd go on to make the number seven shirt his own, proving to be a multifaceted and invaluable piece of the successful 1980s Everton jigsaw.

His heading ability was similar to that of a forward not a winger, but it was his two-footedness that made him such a weapon for the club. 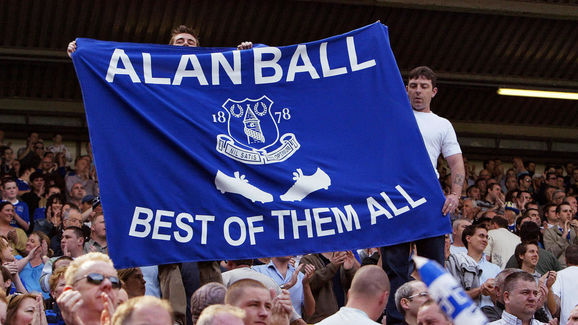 It was Alan Ball’s tireless, yet unflappable, performances for England at the 1966 World Cup that alerted Everton to buy him from Blackpool.

It ended up being a cracking transfer acquisition for the club, as the Toffees got five years of accomplished service out of the midfielder, benefitting from his standing as one of the most versatile midfielders ever to play the English game.

Ball scored at a ratio of around one in three Everton games, which was exceptional strike rate for a player who was expected to break play up and distribute to others. A criminally underrated footballer. Put simply, William Ralph Dean is one of the most prolific goalscorers in the history of the sport… worldwide.

Sandwiched between two seasons each at Nottingham Forest and Tranmere Rovers, Dean spent a whopping 14 seasons at Everton, where he went on to become the greatest player to ever grace the Goodison Park turf. Mikel Arteta, Gary Speed and ​Wayne Rooney were all fantastic in their own ways for Everton, but few could argue against the inclusion of Belgium international ​Romelu Lukaku.

It’s an immeasurable and fickle thing, but football can tend to overappreciate and underappreciate players for different reasons - something that Lukaku looks likely to suffer with after his slightly disappointing spell at Manchester United.

But for Everton, he was outstanding - and between 2013 and 2017, Lukaku became one of the very best in the world as he racked up the goals on Merseyside. His all-around ability was a joy to behold, and open eyes - should - await him whenever he returns. Everton have had a raft of quality players wear the number 11 shirt - but can you really overlook the popularity and heroic status of Daniel Amokachi?

Okay, he only spent two seasons at the club, making 43 appearances in the league, but in that time, the man they called 'The Bull' showed he was more than just a strong frame.

Amokachi was cute in possession, a smart decision maker and was technically gifted - as well as oozing confidence. In fact, he had so much confidence, that he substituted himself on in the FA Cup semi-final against ​Spurs, going on to score twice and secure Everton's place in the final.

We all know what happened next.