The State of Everton: An Overview of the Club's Prospects as Football Takes a Break

Granted, they haven’t played since they were whacked 4-0 at Chelsea on 8 March, and won’t take to the field again until at least 30 April. However, this provides a great time for Toffees supporters to sit back and assess the journey their club has been on so far this season.

Have they improved from last term? Has the Carlo Ancelotti era been a rich one thus far? And where should the club go from here?

Lots of questions to answer. We’d better make a start… It feels as though the season has gone much better than it actually has for ​Everton. Recent memories of Dominic Calvert-Lewin throwing his head into dangerous places to nod home or ​Richarlison prodding the ball past full backs and collecting it on the other side don’t really suggest Everton are down in 12th place.

Suddenly it dawns that Everton have had three separate managers this campaign. It feels an awfully long time ago now that they made a catastrophic start to the season under Marco Silva.

Then we saw the most passionate cameo possible from an interim manager of only four games. Toffees fans experienced a completely unstripped-back version of Duncan Ferguson, that’s for sure, and results improved.

A narrow 3-2 defeat to ​Arsenal in February offered a slightly surreal moment. Everton were facing a man they might have fancied as their manager in Mikel Arteta, and Arsenal were facing a boss they also wanted in Ancelotti. Small world, eh?

Under Ancelotti, form has been inconsistent but by no means wholly bad. The league remains the only competition Everton are still active in, with the Toffees out of both the FA Cup and the League Cup, dismissed by arch rivals ​Liverpool and ​Leicester City respectively. 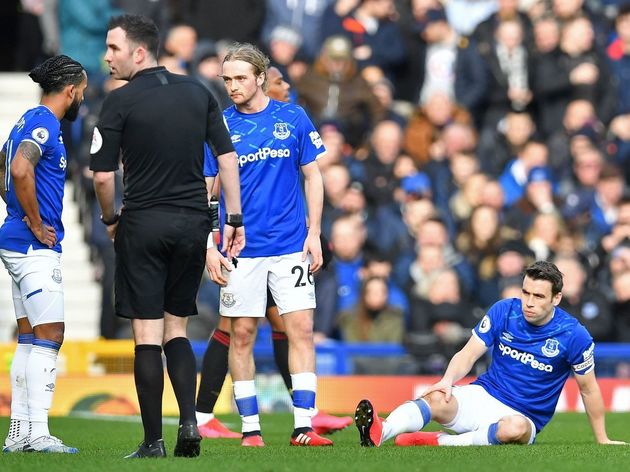 Everton’s injury problems are quite small, compared to the likes of ​Manchester United or ​Newcastle, with just three senior players out.

​Seamus Coleman is sidelined with a muscle problem and new signing Jean-Philippe Gbamin is suffering from an injury to the quadriceps, but both are expected to have recovered by the time Everton are next in action.

It’s less clear when Morgan Schneiderlin will return, however. The former Southampton and United midfielder had knee surgery back in late February and was slated to be out for around two months. Three weeks of that forecasted time period have now passed. With mid-table in the Premier League so cluttered, a good end to the season could prove the difference between finishing seventh or 14th for the Merseyside club.

Games against Norwich, Southampton, Aston Villa and Bournemouth - three of which are at Goodison Park - offer great opportunities to rack up a few key wins. A number of players are out contract this summer, though it may end up being the case that teams finish the season unable to count on some out of contract players if the season continues deep into the summer.

Everton will need to decide whether to exercise their option to make Djibril Sidibe's loan move permanent, while club stalwart Leighton Baines' deal runs out in the summer.

Oumar Niasse, Cuco Martina and Dutch veteran keeper Maarten Stekelenberg will all likely depart on frees come the end of the campaign. The most exciting story circling around the blue half of Merseyside in recent weeks is that Ancelotti, formerly of ​Real Madrid and ​Bayern Munich, wants to bring attacking midfielder ​James Rodriguez to Goodison Park.

Rodriguez would become one of the most valuable and exciting Everton players in a very long time if that rather ambitious swoop did materialise.

It also emerged earlier this month that both Everton and Arsenal are interested in Feyenoord youngster Orkun Kokcu, a Turkey Under-21 international. At 19, he’s already scored a couple of goals from midfield in this season’s Eredivisie. Everton seem to be at a critical point in their history. Ancelotti is one of the most esteemed managers the club has ever had and the players simply must show the necessary fight and bottle in the remaining games of the season. Should they continue to underperform, it would be entirely understandable if the manager fancied a new challenge before too long.

A top half finish must be the bare minimum aim. From there, they could push on next season, potentially securing European football, something that looks beyond them this term.

Next season, a cup run could well be just what the club’s fans need. Silverware is sorely lacking at Everton. For one of the country’s most successful and historic clubs to have not won a trophy since 1995 shows decades of underachievement.

A trophy and European football qualification next season would signal a huge improvement. This season though, that simply isn’t on the cards.