​As you may already be aware, the 2019/20 Premier League fixture list has been announced, meaning clubs up and down the country now know who they will be coming up against on the opening day of the season.

It's always important to start brightly and there are plenty of players who knew a thing or two about getting off on the front foot.

Here's a look a list of the top scorers on opening weekends in Premier League history. Kicking off the list is ​Liverpool legend Robbie Fowler, who recorded five opening day goals during his time with the Reds, Leeds, Manchester City and Blackburn Rovers.

Three of his five opening weekend strikes came during his first spell with Liverpool, one came for City at the start of the 2004/05 season and the fifth was against Sheffield United in 2006 - the same year he returned to Liverpool after five years away from Anfield. The second former Liverpool striker to feature on this list, Michael Owen also recorded five opening weekend goals​ during his time in the Premier League.

Unlike Fowler, all of Owen's goals came during his time with the Reds, before he jetted off for Madrid in 2004. Notably, he scored just his second goal for Liverpool on the opening day of the 1997/98 season - a breakout year for the fleet-footed striker, which earned him a place in England's 1998 World Cup squad. Les Ferdinand enjoyed a stellar career spanning over 20 years, where he featured for the likes of ​Queens Park Rangers, ​Tottenham and ​Newcastle United, becoming one of the highest scoring players in Premier League history.

Two of his opening weekend goals came for Spurs, and he was also able to register one a piece for QPR, Newcastle and Leicester. Kevin Campbell was by no means prolific, but garnered a decent reputation during the nineties and tends to be fondly remembered by ​Arsenal and ​Everton supporters after decent stints for both clubs.

Three of his five opening weekend goals came in one game, when he netted a hat trick against Coventry at the start of 1996/97 - the same year Forest went on to be relegated from the top flight.

One of the most consistent English strikers of the 21st century, Jermain Defoe hasn't failed to deliver for any of the various clubs he has represented since he broke onto the scene with West Ham.

It seems unlikely that we will see him back in the Premier League again as he is set to embark on another year on loan with Rangers from ​Bournemouth, which will be a relief for defences up and down the country. Three of his opening weekend goals came for Tottenham and the other two for Sunderland. ​Statistics in front of goal aside, there is no denying the fact that Dennis Bergkamp was one of the most technically gifted players to have ever graced English football.

The Dutchman exclusively represented Arsenal for 11 years in the Premier League, where he ended up hanging up his boots in 2006. His most impressive performance on an opening weekend came in a substitute appearance against Middlesbrough in 2001, where he bagged a brace in less that 20 minutes. 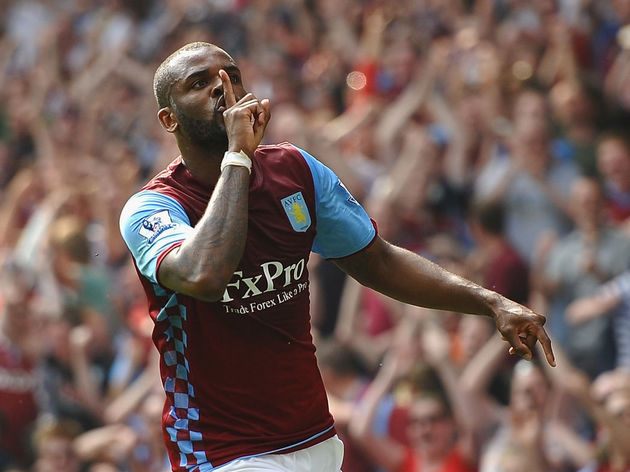 Darren Bent didn't quite live up to the hype surrounding him when he broke on to the scene with Charlton, but he should still be commended for his impressive record in front of goal.

​He scored a brace on his debut for the Addicks against Sunderland in 2005 and then went on to find the back of the net again for the London outfit one year later. His other two opening weekend efforts came during his time up north with Sunderland. The first player on this list to break the five goal tally, it should come as no surprise to see ​Manchester City's Sergio Aguero crop up here.

​The Argentinean exploded onto the scene in the Premier League with a brace on his debut against Swansea and he hasn't stopped scoring ever since. He's certain to star for City once again next season and he'll be eyeing up a few more goals against West Ham in August. ​Louis Saha represented six Premier League teams during his 14 year stay in England, regularly finding the back of the net for the lies of ​Fulham, ​Manchester United and Everton.

It was at Fulham where the French striker really made a name for himself - especially as he scored a brace against future employers United on the opening day of the season in 2001. A ​Chelsea legend in every sense of the word, Didier Drogba was nearly untouchable during his time in London, earning a reputation as one of the greatest striker to have ever represented the Blues. Widely considered to be one the best support-strikers of his generation, Teddy Sheringham fielded for Nottingham Forest, Tottenham, Manchester United, Portsmouth and ​West Ham in the top flight.

He was always capable of getting off to a quick start and he proved to nothing if not consistent - scoring on the opening weekend for three consecutive seasons between 1993 and 1995. We now move on to the top three, all of which are tied for the number one spot with eight goals to their name. Wayne Rooney comes first, which makes sense considering the fact that he is the Premier League's second-highest scorer.

Seven of his eight opening weekend strikes came during his spell with Manchester United, with the other fittingly coming in his last Premier League season for boyhood club Everton. The fact that Frank Lampard is the only midfielder to make this list is testament to his remarkable consistency in the final third.

The current Derby boss began his career with West Ham, where two of his eight opening weekend strikes came, with the others all coming during his time with the Blues - who he could potentially be taking charge of this summer. ​Was there any doubt? The highest scoring player in Premier League history unsurprisingly scored plenty of goals on opening day weekends.

For both ​Blackburn Rovers and Newcastle, Shearer was an unstoppable force that scored goals for fun - right up until his eventual retirement in 2006.