We're used to seeing Virgil van Dijk shut down the world's best attackers, less so eight-year-old Everton fans. Turns out he's pretty good at that too.

The towering Dutchman featured in the Liverpool's 'Kop Kids Difficult Questions' series, where a senior player is grilled by ​members of the academy before the video is shared on social media.

Van Dijk faced intense questioning from the ​Reds' Under-8s, including "do you pick your nose?", "who is the most famous person on your phone?", and "what does it feel like to be the world's best defender?" However, the highlight of the five-minute video came when one of the children revealed he was an ​Everton fan after the player had answered a question about what it had felt like to win the ​Champions League earlier this year.

"I was very happy," he said, before asking the boy if he had been happy for the team.

The smiling lad responded "no", leading Van Dijk to ask him who he supported - and the answer was the Toffees.

While ​Liverpool are soaring eight points clear at the top of the ​Premier League, their fierce Merseyside rivals are wallowing in the relegation zone after a disastrous start to the season. 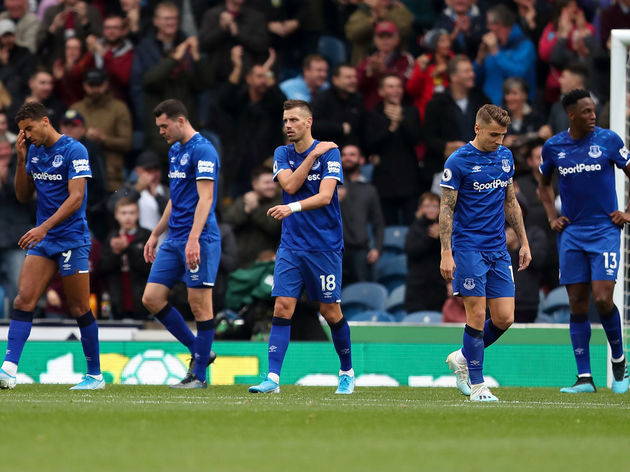 Such is the gravity of the situation, Everton manager Marco Silva has reportedly been given just three games to rectify their problems and get them back on track.

"You support Everton? Tough isn't it, must be very tough though," the Netherlands international jibed.

Then as he bid farewell to the kids at the end of the video, he added: "Good luck, it's gonna be a tough year for you again."

Is VVD scared of anything? Who is the most famous person in his phone? 樂 @VirgilvDijk gets grilled by 8 year-olds 

The gag inevitably drew plaudits from the Liverpool fans in the replies, with plenty of 'crying with laughter' emojis and love hearts thrown about.

There was another comical moment when two of the 'Kop Kids' asked the defender to call Jurgen Klopp on FaceTime, and the German manager failed to pick up.

The 28-year-old also revealed he isn't good at running long distances and is scared of bugs, spiders and snakes - something his Premier League opponents may want to take note of.

Meanwhile, he declined to say who the smelliest player in the squad is - although we have an inkling it's ​Dejan Lovren.

Van Dijk is currently away on international duty with the the Netherlands, who beat Northern Ireland on Wednesday night and face Belarus on Sunday.