​Wayne Rooney's illustrious career is now in its twilight years, as he looks likely to end his career in Washington with Major League Soccer side D.C. United.

But his age hasn't stopped him from producing some memorable moments during his time in America following his 16-year spell in the Premier League with Everton and Manchester United.

From glorious goals, precision assists and even last-ditch tackles, here are some of Wayne Rooney's outstanding moments in a D.C. United shirt...

Goal From his Own Half Against Orlando City

When a defensive mix-up saw Rooney pick up the ball with no support inside his own half, the most likely outcome would have been him losing the ball or trying to pick out a pass, but this couldn't be further from what happened.

WAYNE ROONEY FROM PAST MIDFIELD!!!! pic.twitter.com/dJ5BriAOx3

The former England international hadn't even touched the ball when he turned and saw Orlando goalkeeper Brian Rowe someway off his line.

His only touch of the play was an astonishing one to say the least, as he launched a powerful, looping shot some 70 yards into the opponents' net.

A ridiculous moment which put his side 1-0 up inside the opening 10 minutes.

Rooney was the scorer of three goals during the 5-0 thrashing of 10-man Real Salt Lake back in March this year.

His first came from the spot when he coolly sent the goalkeeper the wrong way, slotting the ball to his left ​opening the scoring just after the half-hour mark.

His and his side's second of the game was the pick of the bunch. Possession was snatched deep in opposition territory before Rooney was slid in behind the defence only to tidily chip the ball over the stranded keeper.

His final goal was probably the simplest, finishing off a squared pass into what may as well have been an empty net.

Tackle and Assist Against Orlando City

With the scores level and Orlando breaking through on goal, D.C. would have been thankful to even get a draw from this tight encounter.

It's safe to saw Wazza isn't renowned for tracking back and helping out defensively but did exactly that, making a last-ditch challenge just inside his own half, surely preventing a goal in the process.

But he went step further, carrying the ball a few yards before launching a hopeful but precise 40-yard ball into the Orlando box.

​Luciano Acosta leapt highest and converted his header into the far corner, earning himself a hat-trick and earning his side all three points in the dying moments of the game.

Although not quite as impressive, similarities can be drawn between this goal and his long-range hat-trick topping strike during his second spell with ​Everton ​against ​West Ham United.

The Montreal goalkeeper rushed off his goal line and made a sliding challenge to prevent Rooney's teammate going clean through on goal.

However, his clearance only travelled a matter of yards before being beautifully controlled by Rooney.

His second touch was even better, lofting the ball over the keeper - who was still standing outside his box - and into the goal.

A free-kick from this range would ordinarily be too far for a lot of players to even consider shooting, but not for Wayne Rooney.

He was never going to allow Acosta to do the honours of taking on the strike, and the outcome shows he was right not to.

A shot of power, dip and accuracy saw the ball fly to the goalkeepers left and into the top corner. Despite knowing exactly where Rooney was going to put it, he was helpless to prevent the opening goal. 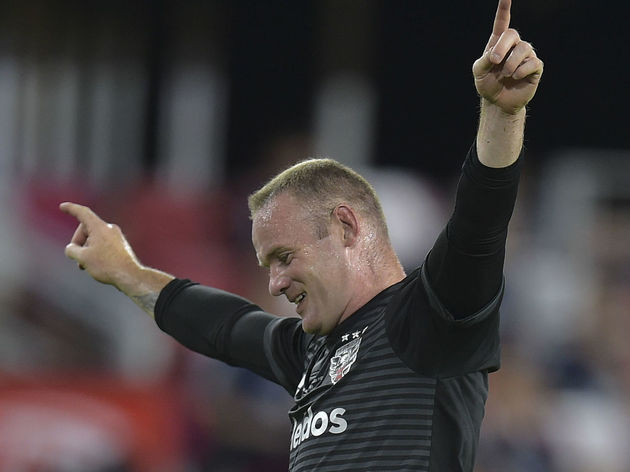 This is one of those goals which is made to look simpler than it really was, and that's all credit to Rooney's technical ability.

The ball was fired into the D.C. United talisman with plenty of place, and it wouldn't have been surprising had we seen it bounce off him straight to the goalkeeper or out of play.

But rather than attempting to generate power himself, ​Rooney just let the ball travel across his body ​and used the pace on the pass to guide the ball past the keeper with his weaker left foot.